a different kind of daddy issues.

Many of you believe the advice: you can't move on with your future until you forget/forgive your past/put your past behind you. In many ways, I agree. But I am not the kind of person who feels the need to tie up every loose end from my past. I strongly believe that you can live your whole life without feeling the need to tell certain people that you forgive them, or see someone one more time. I don't have a "the one that got away" (thank you baby jesus). If someone is supposed to be in my life, they would be.

Now for those of you who feel the need to make contact with any and all estranged relationships from your past before you can move on, Outside the Lines by Amy Hatvany is the novel for you. And for those of you like me....you will totally like it also, (I just talk a lot crazy in these posts). 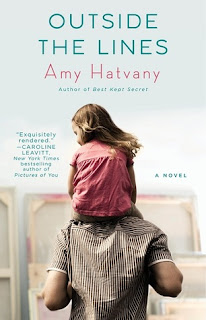 When Eden was 10, she found her father with slit wrists after a suicide attempt. Her parents were divorced shortly after, and her father (David) disappeared from her life. Now 30, Eden has a good life in Seattle. She runs a very successful catering company, but as some of you can relate, Eden is having a difficult time fully moving on with her life without knowing what happened to her mentally ill father. Her search begins on a few clues she has of his whereabouts. She knows he's been homeless so she heads to a downtown homeless shelter and meets (very handsome) Jack, who trades her volunteer hours at the shelter for help with her search. Hatvany's points of view throughout the novel were really clever. We start out with Eden in the present and then jump to Eden when she was 10, the year before her father's attempted suicide. We also see through her fathers eyes, in the past and present.
at Sunday, February 26, 2012