"you is kind, you is smart, you is important."

I know most of you have heard about "The Help" by Kathryn Stockett, whether it be through the movie that was recently released on DVD or the book itself (which I think is the better choice of the two, and reading makes you smarter, ahem). For those of you who have not indulged in this story, you should. And I will tell you why. 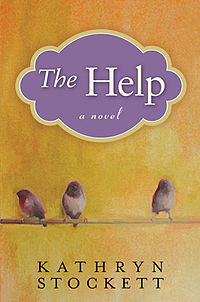 "The Help" is set in Jackson, Mississippi which coincidentally is where author Stockett is from. It is her first novel, which is technically fiction, but we all know how things went down in the South during the civil rights movement. Stockett's main characters are so intensely strong, emotional and real, I hope there are actual people like of them running around somewhere. I read this book during the summer, within about three days, I could not get enough of the humor portrayed through the maids, their crazy cracker bosses and the ever ballsy and awkward looking Skeeter.

The stories of three women were poured into this novel to create the perfect blend of 1960's Southern hospitality, or lack there of. Skeeter is an ambitious, white college graduate who is home to make something of herself while her friends, who dropped out of college to get married, are making babies and playing card games or some other such nonsense. Her best friends are Hilly, who basically runs the town, and Elizabeth, who basically lets Hilly run her life.

Aibileen is a middle aged black maid who works for Elizabeth, cleaning and taking care of her baby girl. Aibileen is such a loving woman, with a beautiful soul, and reminds baby girl that she is smart, kind and important every day, when Elizabeth shows no love at all.

Minny is a spitfire. A black maid, younger than Aibileen with an abusive husband and five children at home who need the money she makes from working, yet she cannot seem to keep her mouth shut long enough to keep her from getting fired.  Minny is the best cook in town, but that doesn't stop Hilly from firing her as her mother's maid and bad mouthing her all over town so she can't find another job. This leads to some pretty sweet revenge on Minny's part. 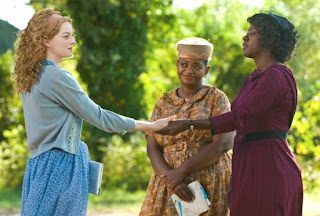 Skeeter approaches Aibileen on the subject of writing a book from the point of view of the help, which is extremely risky for the time period. Skeeter's idea is to write the good, the bad and the ugly of Jackson, and eventually gets maids on board with writing the story. This novel shows us the effects of such a publication and how the lives of the people in Jackson, Mississippi are turned upside down because three completely different women decided to take a stand, not through violence, but through their words. There is a lot of darkness mixed with the sass, including moments that seem a little too impossible to NOT be based on fact. A truly fantastic read, and I will tell you how I liked the movie AFTER you put on your smarty pants and read the book. And yes, I'm aware that I'm bossy.
at Tuesday, January 03, 2012