officially an unemployed teacher!!! who's excited? THIS GIRL.

Hi people! I am officially done with Grad school! All of my NYS teacher tests and education courses are passed, my student teaching placements are complete and my official certification is....well, pending until February, but I am FINISHED!!!! I cannot tell you how good this feels. You are looking at an official unemployed teacher! Well, almost official because I am still technically pending, but lets focus on more important things, not silly technicalities. I will now have all the time in the world to read and review tons and tons of books!

Over the past few months I have been working on adding more young adult novels to my library, seeing as that is the age group I will soon be teaching (hopefully). I really dig middle school, but let's be honest, beggars cannot be choosers, and I am the epitome of a beggar right now, so any grade will do. I spent the last fourteen weeks teaching both middle school and high school, sticking my nose in every student's business trying to figure out what they are reading other than CosmoGirl and their dad's Playboy's. And it is not surprising to anyone that my taste isn't all that different from my students.

On a more serious note...Sarah Dessen is totally in right now for kids grade 8-12. I read two of her books last month so that I could have "book talks" with some of my students, and appear much cooler than I actually am. "The Truth About Forever" and "Lock and Key" were both absolutely excellent. 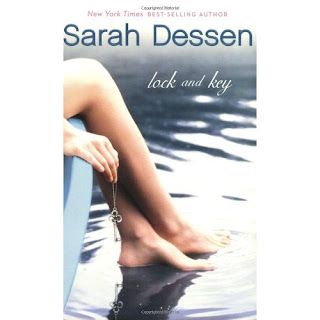 "Lock and Key" is your basic seventeen-year-old (Ruby) with an alcoholic mom who takes off on her and after trying to live on her own for as long as possible was discovered and shipped off to live with her older sister (Cora) who she hadn't seen in over a decade, who lives cozy in a big house with her very nice husband (Jamie), type of story. Ruby and Cora were a decade apart in age, and once their dad left when Ruby was just a tot, their mom went from being a relatively social drinker to a complete lush. She would smack them around, and Cora would take the brunt of it, which is why she worked really hard in school so that she could win a scholarship and get the hell out of there. Ruby felt abandoned when she did not hear from Cora until that day she was found in unlivable conditions, hoping that she wouldn't be found until she was eighteen and legal. Dessen gives Ruby a real shot at making something of her life, a chance to fall in love and a new opportunity to create a family. 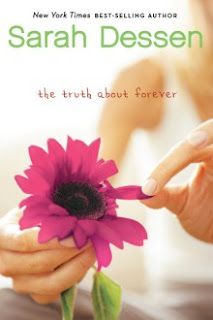 "The Truth About Forever" is my favorite of the two. Sixteen-year-old Macy is broken from the very beginning of this story. Her father, who she was extremely close to, had died suddenly of a heart attack during a run that Macy was supposed to accompany him on, but was too lazy and stayed in bed. Ever since that tragic day, Macy and her mother focused on perfecting every aspect of their lives, rather than grieving their loss. After her father's death, Macy isolated herself from her usual friends, her favorite sport, running and focused solely on her studies, while also throwing herself into a relationship with a very driven boy, who cared more about his future than their relationship. Macy is left to her own devices with her brainac boyfriend away for the summer, working a very tedious job at the local library, until a very eclectic group tumble into her life in the form of a locally owned catering company. After joining their ranks, Macy's perfectly simple life is turned upside down by these beautifully flawed people who show her that being scared of imperfections and uncertainty is no way to live a full life. During this summer Macy learns to heal, open her heart to real love as she mends her broken family.

There are important themes or messages in each Dessen book that teenagers can connect to. I feel like this theme fits both of these novels. You cannot run away from your problems or your brokenness, but you can allow other people into your life, to help you feel whole again. Really, who cannot relate to this message?
at Monday, January 02, 2012