Whenever I crave a feel-good, mildly sexy, happily ever after novel, I look no further than a Nora Roberts, lovey-dovey series. They are always easy reads that don't require a whole lot of thinking, and after finishing the Dragon Tattoo trilogy, which confused the hell out of me with all of the Swedish names and psycho drama, I desperately needed to relax my brain and indulge in something breezy. Enter Nora Roberts' latest series: the Inn at Boonsboro Trilogy, book one: The Next Always. 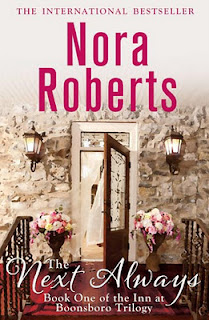 As always, Roberts creates a lovely picturesque setting in the small town of Boonsboro, Maryland where three single brothers and their widowed mother are building an inn, turning old into new again. The first one out of the gate is the architect of the family, Beckett Montgomery and his falling in love story with local bookstore owner, girl-next-door and widow, Clare Murphy Brewster. They've known each other since they were kids, and Beckett always had a thing for her. But when Clare was nineteen, she up and married her high school sweetheart, Cliff and moved to Kansas where he was based in the military. Cliff was killed in Iraq six years ago, before Clare could tell him she was pregnant with their third son. After her husbands death, Clare moved home to be near family and start a new life with her three boys.

It took years of trips to her bookstore for coffee and browsing for Beckett and Clare to finally have their moment. Shared in the half built inn with a mysterious ghost who walked the halls of the old building. Their relationship develops, and includes some drama, as most do. However, this drama is very different from Roberts normal lover's quarrels. I was even on edge while reading, wondering if Roberts was finished with happily ever afters and turned to the dark side. This novel is a spooky, dangerous, page turner, and unfortunately the next installment is not released until May.
at Monday, January 23, 2012