As a lover of Shark Tank, I was super entertained by Julie Halls' Inventions that Didn't Change the World. When I first received the book, I thought to myself, what people come up with now makes me laugh, reading about what inventions people came up with in the 19th Century will be even more amazing. And I was right. 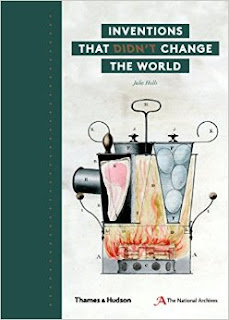 19th Century Britain was a hub for bizarre inventions as design protection was the new rage and everyone wanted in. Halls book is filled with authentic illustrations and descriptions of strange inventions such as an umbrella with peep holes so you can see your surroundings in case of a mugging, and even a collar with spikes sticking out of it  (that were concealed by cloth) that worked to help you defend yourself if you were grabbed around the neck during a mugging which apparently was a thing because there are a lot of self defense inventions. My personal favorite? The corset with the inflatable bust that also gives you an hourglass shape. So the Kardashian's did exist two hundred years ago...
at Monday, June 06, 2016