Although I'm not really into architecture past How I Met Your Mother reruns on Netflix, I was intrigued by a book that featured the two iconic architects who dominated the 20th century between the both of them. Frank Lloyd Wright (1867-1959) and Philip Johnson (1906-2005) and would love to know what they ate for breakfast because they both lived an awfully long time and I don't think they were solely fueled by their egos. Just kidding. About one of them. 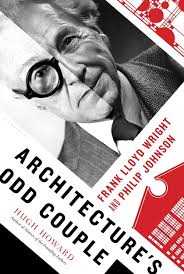 Architecture's Odd Couple by Hugh Howard is a biography that features two men in the same profession who only overlapped briefly in their careers. They were both super talented, polar opposites, yet, they needed each other. For inspiration. For competition. Howard tells both life stories, but waits until the end to put in perspective all that each man accomplished in his career. And although one man was obviously greater than the other, I still enjoyed reading about both.
at Monday, June 27, 2016