lots of depth for a YA novel.

After being abandoned by her parents, and then raised by her grandmother, Mercy Louis has turned into an extremely successful teenager. She's the best basketball player in the state, popular, beautiful. Girl's going places. Or is she? Because nothing is ever as it seems, especially in this debut novel by Keija Parssinen. 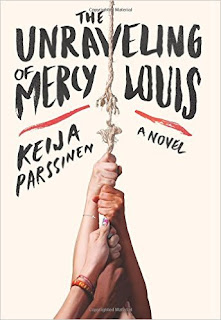 The Unraveling of Mercy Louis is honestly the unraveling of an entire Texas town after a premature infant is found in the garbage and every girl at Mercy's school is a suspect. And this isn't the only news or even the craziest thing that happens. AND don't even get me started on Mercy Louis's grandmother who thinks the Rapture is going to happen any day and the world is going to end. Add that to the cryptic letters she's receiving from the mother who left her behind, and Mercy Louis is going to crack.
at Friday, May 27, 2016