if you're considering adoption.

You know that saying, God gave you this life because you are strong enough to live it? Well, what if you're not? Teen suicides are becoming terrifyingly common, and no one really wants to talk about it. Except for John Brooks who lost his teenage daughter to suicide. She was seventeen and jumped off a bridge, leaving her family to wonder why. She wasn't bullied. She was loved. What did everyone miss? That's what The Girl Behind the Door: A Father's Quest to Understand His Daughter's Suicide is all about. 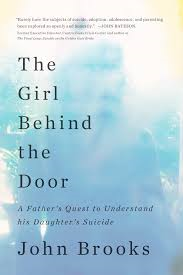 Casey Brooks, before she was Casey Brooks was abandoned at birth in Poland. She was in an orphanage for 14 months before John and his wife, Erika adopted her. The rest of her life seemed fine, but she was suffering from attachment disorder. Although it's unlikely she fully remembered those early years, Casey never felt secure because she began her life neglected, abused, with no primary caregiver. As she grew up, she couldn't accept the love she was given because that part of her was broken. This is a very real story that honors Casey, her struggle, and will now help others going through the same.
at Friday, April 01, 2016