if you haven't read ME BEFORE YOU, do not read this.

ME BEFORE YOU SPOILERS WILL BE FOUND HERE. 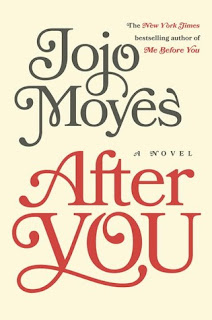 I was feeling pretty discouraged after reading and crying through Me Before You by Jojo Moyes as Will decided to take the plunge and go with the assisted suicide even though Lou was totally in love with him and him with her. It broke my heart into a million itty bitty pieces.

It took me a full week to recover before I could begin the sequel, After You which followed Lou's life after Will ended his. It was REALLY hard to see Lou so low. I didn't even recognize her on the page, if that makes any sense. After traveling to Paris to be able to read the letter Will wrote to her (those were the rules), receiving some money so that she could really start to live, Lou ended up in London, living in a flat she barely furnished because she felt funny using Will's money even though it was given to her with love. She was working a crappy job. On the outs with her family because they disagreed with her decision to be there for Will in Switzerland. And then, she fell off the roof. Now, I'm not going to spoil this one.
It took me a minute to adjust to the new Lou, but I'm glad that I gave Moyes a chance because I really did end up loving the book, and who Lou became after Will. ﻿
at Friday, April 29, 2016