I'm a sucker for a novel with a good title. Sebastian Faulks' Where My Heart Used to Beat is exactly what I'm talking about. How could anyone walk by a title like that and not pick it up? Seriously, an impossible feat. 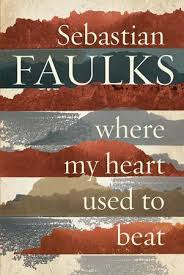 Like many English boys, Psychiatrist Dr. Robert Hendricks grew up fatherless after World War I, and fighting himself in World War II left him broken. Until an older gentleman, Dr. Pereira, who fought with Robert's father in the first world war, sent him a letter. Now it's 1980, and Robert travels to the coast of France to visit (ironically) the only person who ever managed to get him to open up about his past, taking readers back in time to all of his losses, including the woman who betrayed him. Sebastian Faulks fans will not be disappointed by this beautifully written novel.
at Wednesday, March 02, 2016