i love you, but you give me acid reflux.

Y'all already know about my obsession with the Stephanie Plum Series by Janet Evanovich. I can even spell Evanovich without looking it up. It's honestly my favorite series since The Sisterhood of the Traveling Pants, which says a lot because I really loved those books. 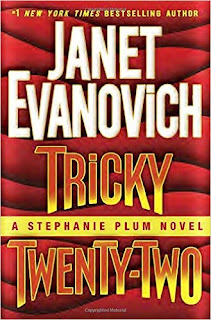 In the twenty-second installment titled Tricky Twenty-Two, Stephanie's most confusing FTA is a fraternity brother (nicknamed Gobbles) who allegedly attacked his dean and then disappeared after he was bailed out by Vinnie. People have seen him, but no one will talk. Things get curiouser and curiouser after Stephanie and her sidekick Lula go through the interviews. Some strange things are happening (and their are even stranger people) on the Kiltman College campus, and Gobbles doesn't seem to have anything to do with them. Things get even more confusing for Stephanie when Morelli breaks up with her. She starts questioning who she is, if she should become a baker, and if she should give herself over to Ranger.

Another amazing storyline by Evanovich if you ask me. Which you kind of did by reading this blog. Lula is funnier than she's ever been and Mama Plum even takes a break from her ironing to get in on the action.
at Wednesday, March 09, 2016