rooting for the underdog.

Lucky for us, Jerry Gladstone hangs out with some pretty cool people. Rappers, actors, sharks. Through his interaction with said people (Snoop Dogg, Quentin Tarantino, Mark Cuban, etc.), he has created some guidelines on how to be successful when facing extreme adversity. In The Common Thread of Overcoming Adversity and Living Your Dreams, Gladstone dedicates each chapter to a different celebrity who has made something of themselves when they had (next to) nothing to begin with. Each chapter also includes advice from the celeb him/herself, which I found to be super encouraging. It's all about being resilient, persistent, and hard work. You have to want it, like REALLY want it. Honestly, I didn't care for some of the celebs who were featured, but each one had something useful to contribute. 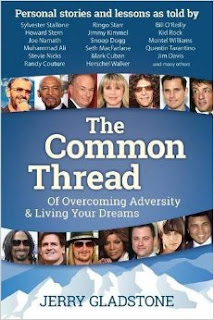