For those of you like me who don't know a whole lot about Henry Kissinger, here is a little background: Henry A. Kissinger was sworn in on September 22, 1973, as the 56th Secretary of State, a position he held until January 20, 1977. He also served as Assistant to the President for National Security Affairs from January 20, 1969, until November 3, 1975. Serving in the times of Nixon and Ford. Kissinger is currently alive and well, and still being relevant, according to historian Greg Grandin and his new book titled Kissinger's Shadow, which is an analysis of Henry Kissinger's diplomatic career and post career influence on foreign policy. Or BAD influence, as Grandin is definitely not Kissinger's biggest fan. He goes into great detail explain why he's as responsible for Iraq and the Middle East as Vietnam. The book is well researched, but still an interpretation. Compelling, but still an interpretation. Factual, but still an interpretation. I think a lot of you will find it interesting, but you'll have to decide if it's the right read for you because it's definitely an acquired taste. 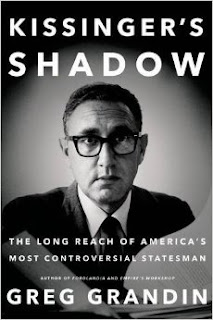 Email ThisBlogThis!Share to TwitterShare to FacebookShare to Pinterest
Labels: Historical