no peace in the middle east, cher.

Being obsessed with Homeland and equally terrified that everything about the Middle East displayed in this fictional show is true, I thought The Knife by Ross Ritchell would help get me geared up for the next season which airs in October, and I was so right. 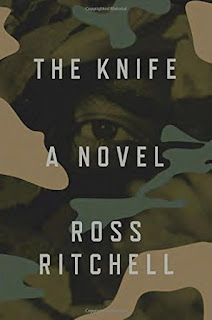 Dutch Shaw has barely anytime to mourn the loss of his grandmother before he is deployed once again to Afghanipakiraqistan (no really though), along with his special ops team who just want to stay alive, leading to the idea of morality and how it plays a huge role in war. Fathers, sons, husbands, killing people to save their comrades and themselves. Being loyal to their country and nothing else. Honestly, Ritchell took me to some places I really didn't want to go to give readers insight on the horrors of war. But I'm glad I read it.
at Thursday, September 24, 2015