delicious; the novel & the recipes.

Since primetime wedding season is almost over, I feel like it's safe to review Season of Salt and Honey by Hannah Tunnicliffe, a brand spankin' new novel that came out on the first of the month about a woman dealing with the aftermath of her fiancé's untimely death. It sounds harsh, I know. 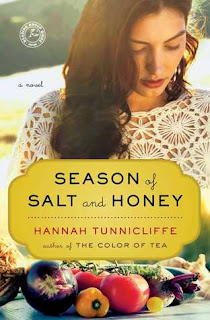 After her fiancé, Alex dies in a surfing accident, Frankie can. not. even. So she runs. I've run for less let me tell you. Frankie takes off to a secluded cabin, away from her overbearing family, and the painful memories, to give her heart time to heal itself. As time moves forward and her time to grieve is interrupted constantly, Frankie sees a truth to her relationship with Alex she never before allowed herself to see. And after being broken into a million pieces, she discovers that the most unlikely of people can make her feel whole again.
at Friday, September 11, 2015