well this was quite the ride.

In Mike Pace's deeply thrilling paranormal-ish novel, One to Go Tom Booker finds himself with an impossible choice to make. While texting and driving, he loses control of his vehicle, hitting a minivan that was carrying his daughter, her friends, driven by his sister-in-law. Before the minivan flipped over the bridge though, time stood still. And Tom was given a choice. Either he could let his little girl die, along with her friends, OR he could kill someone every two weeks to make up for the loss of those souls. Thinking he was having some sort of crazy hallucination, Tom chooses his daughter. Not thinking much of it until two weeks later when his sister-in-law (the driver) is found brutally murdered. So if he doesn't kill someone, anyone, in two weeks, his daughter and her friends are in serious danger, and so on. Pace has quite the imagination, and I enjoyed every bit of it. 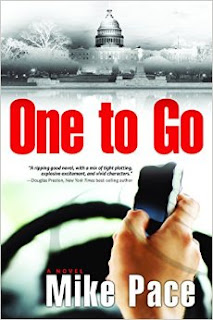