Jessica Knoll is definitely an author for the every girl. Having credentials from Cosmo AND SELF (my favorite magazine), she has a way with women, and she really proves that with her debut novel, Luckiest Girl Alive and heroine (or anti-heroine?), TifAni FaNelli. 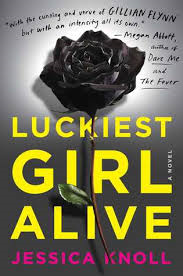 Twenty-eight-year-old Ani has spent her twenties reinventing herself. Working toward the woman's version of the American dream. Kick ass job, check. Nice digs, check. Hot body, check. Successful and sexy fiancé, check. Her life is going on perfect, but fourteen years ago something happened to this girl that she just can't shake. And apparently no one will let her as she's asked to participate in a documentary revolved around the trauma, telling her side of the story. Ani is planning a wedding, starving herself into a size negative, about to marry a man she doesn't even love, to forget a past that won't go away. Alternating between her twenty-eight and fourteen-year old selves, I wouldn't call Ani a likable character, but the more you learn about her past the more you understand her present. And everyone deserves a chance to tell their side to the story.
at Wednesday, May 20, 2015