the best debut i have ever read.

Typically, books with male narrators aren't my favorite. There are always some exceptions, but I don't really get men. So I prefer to read stories with strong heroines narrating. The Rosie Project by Graeme Simsion has officially changed the way I feel about male narrators forever with genetics professor Don Tillman. Don is a thirty-nine-year-old associate professor at a prestigious college in Australia. He has two friends, does not understand social cues, and is fully aware of his faults as a human. Although he has not diagnosed himself as having Asperger's, it is clear to every teacher in all the land that he has some form of autism, and getting inside a head like that is one of the most interesting and hysterical things I have ever read. 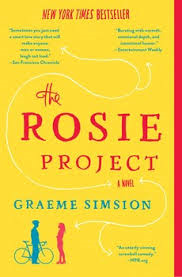 Don is looking for love. He knows he is not an ideal partner because he is so strange, but he still thinks it's possible that there is someone out there in the world for him. Don takes time out of his very strict schedule to create The Wife Project. He created a sixteen page questionnaire to help him find his perfect match, and women actually fill it out. Although no one is perfectly suitable, Don goes on a few dates, which typically end in disaster. Then he meets Rosie. Someone who is the exact opposite of who he is looking for. They have dinner, which turns into the making of another project, The Father Project. Rosie wants to find out who her real father is, and since Don is a genetics professor, he is the man to help her. The project turns into a lot of time spent together, which is also hilarious because Don is so literal and takes everything literally, and Rosie's personality is so big and crass. It's so fun to read how they respond to each other. But is it possible that these two extremely different people can make a real relationship work? Don would say "Incorrect" but you shall see.
at Monday, April 06, 2015