Once I finished The Rosie Project, I immediately ran to the library to put a hold on the next installment, The Rosie Effect which follows Don and Rosie to New York where Don works as an associate professor at Columbia and Rosie is a doctorate student in psychology. If you are new to these books by Graeme Simsion, please stop right here and go grab the first book. You will not have nearly as much fun reading the second one first. 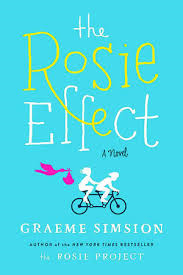 In New York, Don and Rosie have fallen into a comfortable life. They both travel to Columbia daily and work together as bartenders a few nights a week for extra cash as Don's salary is their only income. Don is still weird, and Rosie still loves him, which is surprising to Don who always has in the back of his mind that Rosie will change her mind at any moment. And when Rosie tells Don that she's pregnant, and he runs off without a word, I'm sure she thought twice about her love for him. But Don's a planner, we know this from the previous book. He can't really handle surprises, and in this book we learn how he has been coping with meltdowns commonly found in people who are autistic. Anyways, the hits just keep on coming when Gene moves to the big apple and in with Don and Rosie after his split with Claudia, which puts a strain on Don and Rosie's relationship. And then there is the time that Don gets arrested... But I don't want to spoil everything so I'll leave it at that. This was the perfect sequel, just good as the first installment, which is quite the accomplishment.
at Wednesday, July 22, 2015