I love fairytales, and all things magic, really. So I was super pumped to receive The Turnip Princess and Other Newly Discovered Fairy Tales which is a collection of original Bavarian stories by Franz Xaver von Schonwerth. In 2012 it was reported that five hundred unknown fairytales (written by Franz Xaver von Schonwerth in the 1800's) were uncovered. Seventy-four of them made it into this charming book which is divided into six sections: Tales of Magic and Romance, Enchanted Animals, Otherworldly Creatures, Legends, Tall Tales and Anecdotes, and finally Tales About Nature. The stories are short as fairytales are. There are damsels, heroes, talking animals, and sinister plots. But there are also women heroines who are strong and clever. I will warn you though, this collection is more dark and twisted than happily ever after. 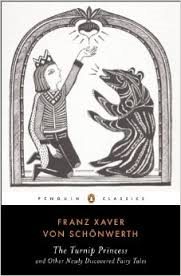