The beloved author who brought us Proof of Heaven is back with another beautiful novel. Proof of Angels by Mary Curran Hackett is sure to touch even the coldest of hearts. And I would know, I live in WNY. 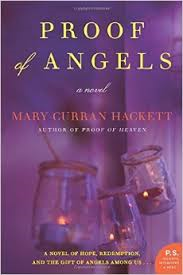 Firefight Sean Magee has never believed in angels. Especially after he watched his nephew die after numerous medical attempts to save him from his heart defect. But once Sean himself survives a near-death experience thanks to an angel's guidance he becomes determined to right the wrongs of his past, overcome his demons and his drug and alcohol abuse. To fix his future, Sean must face his past, the people he's hurt and the love he's lost. This novel is wonderfully uplifting as we watch a man stand up and fix what's broken. You may feel for him, or he may give you the courage to fix what's broken in your own life.
at Wednesday, February 11, 2015