When I first received the spunky pink covered Alice + Freda Forever: A Murder in Memphis, I was totally thinking Thelma & Louise, not insane lesbian slices the throat of former lover once their families forbid their love. WHAT? Alexis Coe's account of this true story dated back to 1892 totally blew me away. 19-year-old Alice Mitchell planned to marry the lady of her dreams, 17-year-old Freda Ward by passing as a man. Not the worst plan I've ever heard, but once their romance was found out, they were obviously forbidden to see each other as lesbians can barely make a break for it even today. Once Alice realized that Freda was able to move on without her, she sliced her throat with her father's razor and wound up dying in an insane asylum a few years later. Totally crazy story, and Coe retells it with a ton of sources including, letters and a full account of the legal proceedings which is the most interesting part of the book if you ask me. This is without a doubt the best non-fiction I've read in months. No offense to the others, but where are your lesbian murderesses? 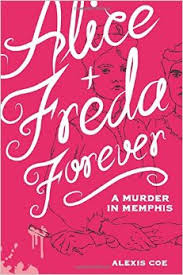