what happens when a novelist writes a biography, perfection.

Joan of Arc believed that God had chosen her to lead France to victory in its long-running war with England. So this peasant girl convinced Charles of Valois to allow her to dress up like a man and lead his French army into battle that ended in victory over the English in the Hundred Years' War. Then of course when she was 19 she was tried and burnt at the stake for witchcraft because of all of her running around claiming that she was the virgin destined to save France from its enemies. This was one badass virgin; whether hearing voices is sorcery or not, Joan of Arc risked everything for her country and Kathryn Harrison's Joan of Arc: A Life Transfigured is my favorite account of her life to date. In this book Joan of Arc is viewed as an historical figure, and Harrison does not romanticize her like so many others. It's very factual, interesting, and will be such a great resource to use in the classroom. 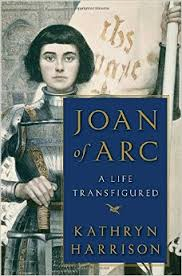