Dirty Rowdy Thing by Christina Lauren is the second installment of her super popular Wild Seasons series, the first being Sweet Filthy Boy. The titles alone let you know good times are ahead, and you won't be disappointed in book two or the relationship between the 'all the women who independent' Harlow and the super sexy, yet guarded fisherman Finn. They may have only been married for 12 hours in Vegas, but they had enough orgasms to feed a third world country. Having only seen each other once since then, you can imagine Harlow's surprise when Finn turns up in San Diego. Finn is in town for a couple of weeks, and because they have some friends in common, the two keep bumping into each other. Not only does the physical attraction between them sizzle right off the page, it's fun watching them get to know each other. I dare you not to make a baby after reading this, I mean, if you want to. 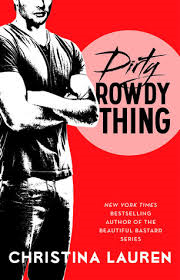