just in case you missed it.

*Repost because this one was just toooooo good. And because I'm leaving for a weekend in the big apple today and I'm busy.

I know I always say this about Jodi Picoult novels, but it's just TOO true to ignore. I get smarter while reading, and after I'm done, I am an expert on whatever subject Picoult has decided to invest herself in while writing. For Leaving Time, it was elephants. I now know that a baby calf under the age of two cannot survive in the wild without their mother, even though they are part of a heard. I learned that elephants truly never forget. I learned that Asian elephants and African elephants have two completely different personalities, just like the people. I also learned that Picoult just keeps getting better and better. 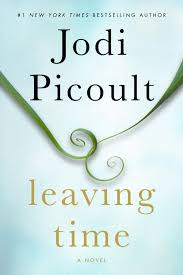 Leaving Time is written from four different perspectives. Thirteen-year-old Jenna's mother Alice disappeared ten years ago, and no one has any idea if she is alive or dead. Jenna has made it her goal to find her. Alice (who we hear from in the past tense) has spent her adult life researching elephants and how they grieve. Spending time in Africa before meeting Jenna's father and moving to New England where he owned an Elephant Sanctuary after she found out she was pregnant with Jenna. She continued the research with the elephants in captivity until tragedy struck. Jenna enlists the help of Serenity Jones, a former celebrity psychic who was famous for finding missing people, and Virgil Stanhope, the police officer who was there the night her mother disappeared, to help her solve the mystery. Jenna is single-minded in her search and will do whatever it takes to find her mother. I have to be honest, when the truth came out and slapped her in the face, I felt the sting.
at Friday, April 24, 2015