Ancient Greece is everything! Did you see Hercules this summer? The Rock? Loved it. I adore all things Greek so this new Odysseus series by Valerio Massimo Manfredi is right in my wheelhouse (and the story of Hercules is tied in). The Oath, which is the first installment, re-introduces Odysseus the Greek hero who you may have met in The Illiad and The Odyssey by Homer. It's a retelling in the best possible way. And those of you who are a little less scholarly and opted out of Homer's books will get to experience them in a really fun way. Manfredi begins at the beginning, with Odysseus's younger years and his very first quest to find truth in the stories he has been told. Manfredi does such a great job bringing readers deep into the world of Ancient Greece, the time and place just shoots off the pages. 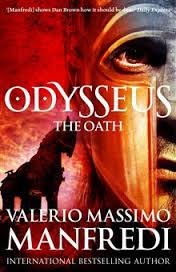