YA novel set in the 90's, my favorite decade.

Jessie Ann Foley is an English teacher turned author (and still English teacher), which is exactly what I want to be when I grow up. Her very first YA novel has been winning prizes and fabulous reviews all over the place, and that won't stop here. The Carnival at Bray is set in 1993 Ireland. Main character Maggie Lynch has just left her home (and the only stable adult in her life, her grandmother) in Chicago to move to Ireland as her mother decided to marry a man who appears to have it together more than her past dozen boyfriends, and move her and her little sister to his hometown of Bray, outside of Dublin. 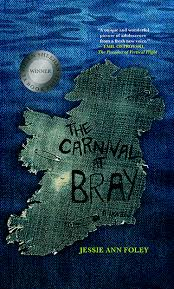 First of all, I loved sixteen-year-old Maggie the second I met her. A girl with a flighty mother who has to play grown up to her younger sister more than any teenager should, she is wiser than her years and super likable. The novel is filled with typical teenage angst. Trying to fit in, in a new school (in a different COUNTRY), growing up, young love, all the good stuff. And Foley writes like an English teacher, amazing character development, imagery, and enough swear words and drama to keep any teenager interested.
at Tuesday, November 11, 2014