This is the time of year when we are supposed to share what we are thankful for. Well, today I am thankful for Susan Ericksen and her lovely reading voice which made J. D. Robb's futuristic cop thriller, Festival in Death extra amazing, even in audio form. 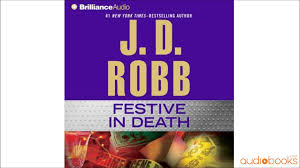 Set during the Christmas season of the year 2060, Lieutenant Eve Dallas is looking for the person responsible for the murder of personal trainer, Trey Ziegler. The suspect list is growing as long as Santa's seeing as Trey and his abs left behind many a woman scorned, making him a not particularly likable dead guy. I personally enjoyed how this installment of the In Death series was not as dark as others. It's a nice holiday read as Eve and Roarke have their annual holiday bash.  Festive and fun, if you don't mind some murder with your figgy pudding. While not as violent as past novels, the plot has some clever twists and turns that shock the characters as well as the reader.
at Friday, November 21, 2014