we used to be friends.

My mom and I are obsessed with Veronica Mars. The show, the fictional character, the movie. So when we heard that writer Rob Thomas was coming out with a series of V. Mars novels picking right up where the movie (which came out in March) left off, we almost had kittens! Or whatever that expression is. I knocked back the first installment in about 36 hours. It was like catching up with an old friend, one that you like a lot. 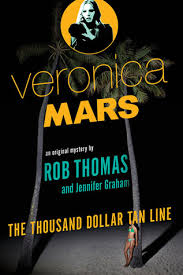 In The Thousand-Dollar Tan Line Veronica gets her first high paying gig since her dad almost died in the hit and run that killed Deputy Sacks which happened at the end of the movie. She took over Mars Investigations while Keith has been recovering, and Keith isn't super pleased about her being back in the PI biz when she is one bar exam away from being a successful attorney in anywhere but Neptune. It's currently spring break and Veronica is approached by a big wig at the Chamber of Commerce to help find a girl who went missing after a night of drunken debauchery. The potential kidnapping of a teenage girl is killing business for local bars, hotels, restaurants and strip clubs in the coastal town and Sheriff Lamb is a fool, so Veronica takes the case basically so she can pay the electric bill and her newest employee, Mac. Once pretty teenage girl number two goes missing things start getting interesting, and Veronica learns once again that the past can never just stay in the past.
at Monday, August 25, 2014