so many piggy banks.

America's Fiscal Constitution: Its Triumph and Collapse by Bill White is a must read for anyone  invested in the U.S. government. I'm talking voters, politicians, tax-payers...so pretty much everybody. We didn't just become a nation of severe debt overnight. There is a history behind it, and White tells about our past in foreign policy and political agendas in such an engaging way, even I wasn't bored, and that says a lot as I have the attention span of a small child. White begins at the beginning. Once his introduction is complete, he jumps into the narrative, starting with the Founding Fathers being unable to pay the bill for George Washington's retirement party for four months because the pre-Constitutional Convention federal government was so broke. Hmm, it's all starting to make sense now. We were never good at this. 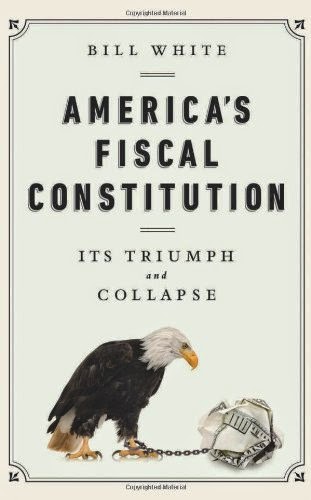 White also shared his own theories on the subject. One theory being that raising taxes will not reduce deficits, so if the government were to cut taxes, it will fuel economic growth and energize the nation's economy. I choose that one.
at Tuesday, June 10, 2014