An ordinary,  not super scholarly college drop out was attacked by a mugger resulting in a severe head injury which turned him into a mathematical genius is the basic premise of Jason Padgett's true narrative of his experience cleverly titled Struck by Genius. Violent blows to the head outside of a karaoke bar that should have resulted in his death, completely altered Padgett's brain function, giving him unique gifts and an interest and understanding of geometry he never had before. It's really a fascinating story, and Padgett tells it well, as well as any math genius can anyway. He touches on his past, his personal experience recovering from his head injury, going from an extrovert to an introvert. He also touches on the science behind his injury and the amazing results of his recovery. Of course, not all good things come from such a traumatic experience. Padgett now suffers from OCD, depression, and PTSD. Which is stressful, but better than the alternative. Struck by Genius is a memoir like no other because miracles like this one don't happen at every karaoke bar. 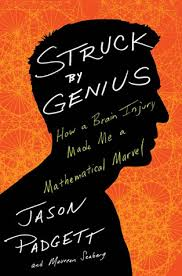