It has been stated time and time again that America has one of the poorer public education systems in the world. David C. Berliner and Gene V. Glass don't agree, and are here to bust open all of the myths attached to public school's in this country in 50 Myths and Lies That Threaten America's Public Schools. 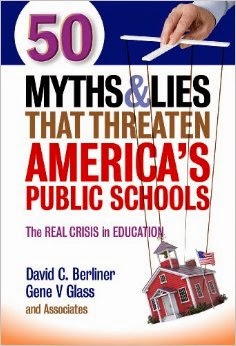 The first myth is that America scores low on international tests, when really international test scores are poor indicators to use in ranking the quality of national education systems and even worse in predicting future national prosperity. Their words, not mine, but it makes sense. Poverty is an issue as well. America has a much higher poverty level than the country's that are scoring higher on these tests, so averaging out the scores, of course we are going to be lower.

The main idea of this resource is that the public education system is being accused of failing based on lies and myths that have nothing to do with the SYSTEM itself. It has to do with silly tests, parents who don't take the time to educate their children for whatever reason, WAY too much homework, among many others. A bunch of people in Albany, and other state capitals think they know best when it comes to America's public education system, when really they are trying to fix a system that's not even broken. Well, it wasn't anyway, until they got their hands on it.
at Tuesday, May 27, 2014

Email ThisBlogThis!Share to TwitterShare to FacebookShare to Pinterest
Labels: Educational