I've told you guys how obsessed I am with the Dollanganger series by V. C. Andrews. I reviewed the first two installments last month, and have finished the series in full. The third book was narrated by Cathy's sons Bart and Jory, which was all fine and everything, but I prefer Cathy. The fourth was narrated by a past-middle aged Cathy, the family all being back in Foxworth Hall. It was heartbreaking, and fabulous all at the same time. 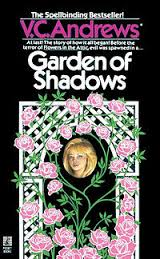 The point of my review today is to tell you about the prequel to the series titled Garden of Shadows which is narrated by the grandmother, Olivia Foxworth. Yes, the horrible grandmother who did all those terrible things to the children like lock them away in one room for three years, beat and starve them. This prequel tells of Olivia's life. How she grew up, and tells of when she met Malcom. She shares her hopes and dreams to find love, even though she thought she was going to become an old spinster, as no one paid much interest in her because she was too tall and too plain. Malcom came into her life when she was twenty-four, called her an "attractive woman" who had the business background that he wanted in a wife, and poof, they were married. It wasn't romantic at all, which left Olivia who was very naïve at the beginning, pretty let down. But she got used to life at Foxworth Hall, and the awful Malcom Foxworth as her husband. The story goes on to tell of their marriage, children (Mal and Joel), and also tells of Malcom's father Garland, his young bride Alicia, and their son born a year after Joel, Christopher. I don't want to go into major detail of Cathy's mother, Corrine's birth, because it's a ginormous spoiler, but it was so strange learning about Olivia AFTER we know how creepy she was to Corrine and Christopher's children. If I had read this novel first, I would have had an entirely different perspective of Olivia and her cruelness. But I guess that's the affect V. C. Andrews wanted to have on readers. She wanted us to hate her while reading the series, and then see her side of things after everything was said and done. Just makes me respect this author all the more.
at Wednesday, April 02, 2014