Americana: The Kinks, the Riff, the Road: The Story

In his memoir Americana, the Kinks former front man Ray Davies opens up to audiences, revealing much more than 1994's X-Ray autobiography, which is such a treat for fans. Keep in mind that being a memoir, Davies writes about his personal life more so than the band. It's a kind of scrapbook, blending diary entries and slabs of lyrics by the now 69-year-old singer. Americana carries on about two significant time periods: The post-’60s rise of the Kinks in the States and the bizarre circumstances that led to Davies being shot by a mugger in New Orleans in 2004, but there are pieces of his childhood mixed in along with his other experiences in the States as well. Although Davies has some dark history, he has a way of lightening any mood with his surprisingly good sense of humor that makes him impossible NOT to like. That being said, his writing makes it impossible not to like this book, regardless of your generation or your musical tastes. 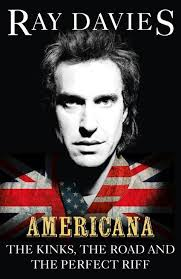