and then there were three.

SPOILER ALERT! (do not read if you haven’t finished Flowers in the Attic) 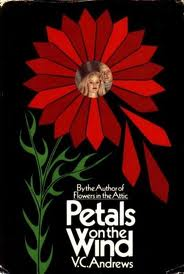 I know you all have been waiting patiently for me to finish the second installment of the Dollanganger Series, Petals on the Wind by V. C. Andrews, and lucky for you, I did so a few days ago. It was better than the first book, in my opinion. The Dresdsen Dolls picked up right where they left off on their escape to the south. After realizing their mother had begun poisoning them little by little with arsenic, killing their beloved brother, Cory, they got the hellllll out of Foxworth Hall. Cathy is still our narrator and the three Dolls finally see a light at the end of the tunnel when Carrie gets sick on the bus and the children are saved by a mute housekeeper named Henny who brings them to her “doctor-son” or boss Paul Sheffield to take care of little Carrie. Paul ends up taking them in and giving each the opportunity to follow their dreams. Chris to be a doctor, Cathy to become a prima ballerina, and Carrie to try to find her way in the world without her twin brother by her side. I don’t want to get into too many details, as a lot happens to the children during this novel. They all grow to their twenties (although Carrie doesn’t grow much at all), and Chris to thirty, and it doesn’t seem that Cathy will ever stop planning revenge on their mother who is now married to the handsome Bart Winslow who’s family lives only a town away from them in South Carolina. Cathy’s obsession with payback ultimately causes ruin to much of her own life. Leaving us to wonder if forgiving and forgetting really IS the best course of action. Because revenge doesn’t taste quite as sweet as Cathy thought it would.
at Thursday, February 20, 2014