Karen Zacharias is known for her non-fiction works. Mother of Rain is her first novel, and fans couldn’t be more pleased with it. 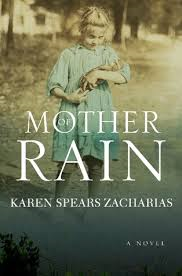 After her mother passes away, Maizee Hurd is sent to live with her childless aunt and uncle in Tennessee. After facing major tragedy at such a young age Maizee suffers from mental illness in a time when there are not a lot of resources for her. Although her aunt and uncle love her as if she were their own, this is a story about how love does not conquer all. Maizee eventually falls in love with a kind man named Zeb, and it appears as if he is what she needs to calm the voices in her head. When Maizee discovers she’s pregnant, she and Zeb marry. All is going well, despite the surprise bundle of joy, until Pearl Harbor is attacked and Zeb feels he must enlist. While he’s gone, Maizee’s voices come back and she struggles to fight them.
You’ll find it hard to put this novel down until it’s finished, and after, you’ll wonder if it was really fiction at all.
at Tuesday, December 17, 2013