In Karen Chance’s October 1st installment of the Cassie Palmer series, Tempt the Stars, Cassie’s life is as stressful as ever. 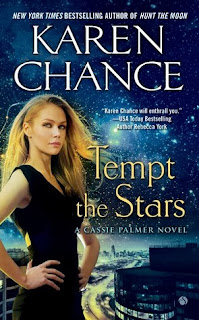 Tempt the Stars picks up a week after Pritkin saves Cassie by giving her energy to live; resulting in Pritkin being taken by his demon father and essentially losing his freedom. Ever since Cassie's coronation, where she officially became Pythia, she's had to deal with all kinds of super naturals knocking on her door; always wanting something from her because she is now the world’s chief seer. In this story Cassie drops everything in hopes to get Pritkin back.
If you have no idea what I’m talking about that means you haven’t read the series and you probably should.
at Wednesday, October 09, 2013