a little history and a little mystery.

I love a good conspiracy novel, and Oliver Potzsch really delivers with his The Ludwig Conspiracy. 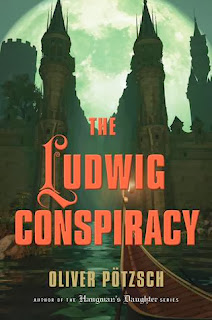 Ahh, the Neuschwanstein Castle. It plays a large role in the novel as the actual real-life King Ludwig commissioned its building in the late 1800’s. I visited Munich, Germany a few years back and was supposed to visit the fairytale castle, but it was closed on the day my tour group was supposed to go. I was so, so upset. I mean, as a princess, fairytale castles are my thing. I’ll have to drag Manfriend off to Germany one of these days.  Now back to our story…


The Ludwig Conspiracy moves between time periods, giving us glimpses of past and modern day Bavaria, while our two main characters from the present, Steven Lukas and Sara Lengfeld race to solve a mystery and stay one step ahead of those that would kill them for the secrets contained in an encrypted diary written by Theodor Marot, Assistant to the Royal Physician to King Ludwig.  It takes Steven's knowledge of 19th Century history and Sara's computer expertise to begin to make sense of the encrypted text, and their journey takes them to Ludwig's famous castles searching for the clues needed to crack the diary's code, all the while trying not to get murdered. History and mystery buffs alike will love this novel.
at Friday, October 18, 2013