A man writing a biography about a woman...I'm sure it happens more than I notice, but it's still fun to see. 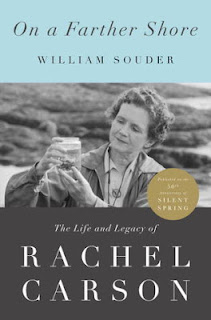 William Souder has written an engrossing new biography on Rachel Carson, the superstar of narrative environmental nonfiction, titled On a Farther Shore: The Life and Legacy of Rachel Carson. Souder draws a portrait of cultural and political life in the middle of the 20th century and places Carson squarely at the center of it. It was a different time for science and a different time for science writers. I find science rather boring, honestly, which is why I was extremely intrigued when I read on to find how spicy Carson's life actually was. In 1954, her and Dorothy Freeman began a very passionate relationship, that was anything but platonic. Carson wrote Silent Spring in which she meticulously described how DDT entered the food chain and accumulated in the fatty tissues of animals, including human beings, and caused cancer and genetic damage, WHILE she had cancer herself. This chick was wild, and I'm glad a voice that was so unpopular in her day, has become so popular now.
at Thursday, December 06, 2012