for your reading pleasure...

I really like James Patterson. I like his writing style, his characterization, and the way that he collaborates with others to create all types of genres. My student's summer reading assignment was Maximum Ride, which is the first book in a young adult series by Patterson, that was really enjoyable to read and to teach.

More recently, Patterson released the novel NYPD Red, which is a collaboration with Marshall Karp, and a laugh out loud murder mystery, if that makes any sense. The writing was clever, the reading was easy, and I had a lot of fun page after page. Here's a little taste... 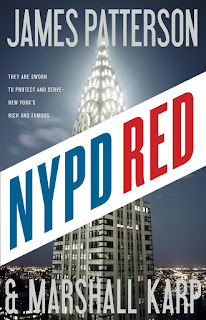 Detective Zach Jordan is a member of the NYPD Red squad. His unit is responsibly to protect celebrities from screen, stage and sports and anyone else rich enough to deserve special treatment. Jordan's partner has recently been injured on the job and he is 'temporarily' partnered with Kylie McDonald, which is super awkward because they used to date. McDonald attended the academy with Jordan and is (of course) drop dead gorgeous . But she is now happily married, to a Hollywood screenwriter. The novel begins as New York is hosting 'Hollywood on the Hudson' and  NYPD Red will be stretched thin to protect the stars that have descended on Manhattan. A much despised producer ends up dead, and the two Red unit detectives spend most of the novel chasing a killer who clearly has a special vendetta against the Hollywood "big wigs," and plans to carry out his murderous acts just like in the movies. And then there's Jordan trying to get a grip on his attraction for McDonald...just to make things a bit more complicated.
at Tuesday, November 13, 2012