for the love of the restaurant.

I am not exactly the fine dining kind of gal. Manfriend and I rarely go out to eat because we'd rather cook at home where it's pants optional. But that's a story for another day. My next review is about the art of restaurants, a book that does not focus on the chef's (for once), but the restaurant owners themselves.

The Art of the Restaurateur by Nicholas Lander includes all aspects of what makes a great restaurant, written by popular restaurant owners. Lander travelled the world to speak with 20 industry leaders who run the top of the top restaurants, from public figures Danny Meyer (Union Square) in New York, Jo Bastianich (Mario Batali's partner) and Trevor Gulliver (St. John in London) to equally accomplished but lesser-known individuals. You will see that the food itself plays a smaller role than one might think. Atmosphere, design, location, and organization matter a great deal as well when creating a fabulous restaurant. 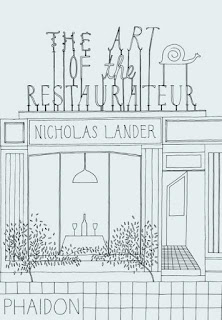 As a former restaurant owner himself, Lander takes his reviews of others' restaurants very seriously, while making The Art of the Restaurateur an honest portrayal of the life of a restaurateur in many corners of the world.
at Wednesday, November 28, 2012