I am a little offended that The 2,548 Wittiest Things Anybody Ever Said was published before I got my two cents in. Hello? I am funny. Super funny. Facebook likes by the dozens funny. Your bad, Robert Byrne. 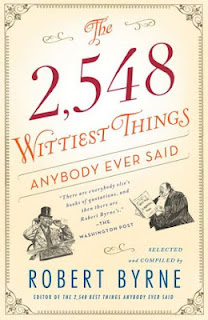 This book is as it sounds, filled with 2,548 numbered "witty" quotes by people who are actually funny, and others who must have let Byrne see them naked. Joke. Some of the quotes are just a little old school funny. I am sure most of these folks had no idea they were being funny at the time. For instance, Katharine Hepburn said that "Perhaps men and women should live next door to each other and just visit now and then." I mean, that sounds like a reasonable suggestion to me. Many of those quoted in Bynre's book are dead, which is kind of a downer. But he did include Demetri Martin, who is hilarious, and still breathing - "Whenever something good happens to me, I wait two weeks before telling anybody because I like to use the word fortnight."  Daniel Tosh is also quoted a few times, clearly Byrne wanted to make sure he got a few laughs from every age.
at Tuesday, July 17, 2012

Email ThisBlogThis!Share to TwitterShare to FacebookShare to Pinterest
Labels: Silly