Ah, you hear that? It sounds like Friday, or rain, or both. Now let’s all be honest for a second and admit that there is at least one person at your workplace that you cannot stand. This doesn’t make you a bad person, I can’t stand most people and I am down right lovely. That being said, each and every one of us can relate to the Dilbert comics. For the babies, Dilbert comics debuted in 1989 and still hit the comic’s page today. Scott Adams illustrated the strip while slaving away at his desk in the tech department at Pacific Bell. He wrote it for the people. Those who are wasting their lives away at a 9-5 job they hate. Dilbert is a lot like how Adams used to be, before he voluntarily got laid off.

In a nutshell, Dilbert is filled with characters that exist in every office. The guy who never does anything, the boss that irritates everyone. Teamwork Means You Can’t Pick The Side That’s Right is a collection of Dilbert comics strips from February 13, 2011 to November 20, 2011. Ultimately these funnies just poke fun at corporate America, and I won’t argue with that. 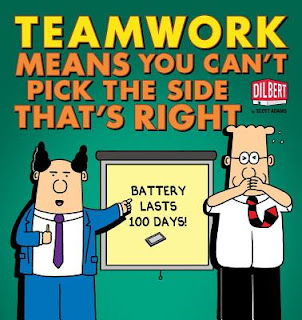