a mystery series with a british accent.

I haven’t read through the Maisie Dobbs Novels by Jacqueline Winspear, but I know a lot of people who have and they cannot say enough good things about this mystery series set in London in between the spring of 1929 and the summer of 1932. Here is a list of all the titles for those of you who would like to add them to your “to read” list this summer. 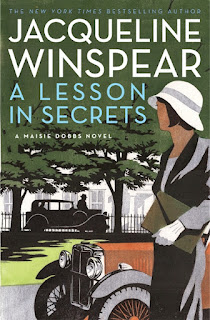 I asked a friend of mine to help me review the most recent installment, A Lesson in Secrets because I would prefer to begin at the beginning, and I cannot give you an honest review of a book that I haven’t read yet, duh. Let me set the mood for you: It is 1932 and the Nazi party is present in England. Maisie is an English private investigator. Her methods are a bit unusual and include psychological analysis, meditation and even a mild psychic awareness (which is the open state of awareness in which the conscious mind can tap into the psychic mind). When there is a murder at a private university, Maisie is called to work undercover for the British secret intelligence as a university instructor. While her superiors are single-mindedly concerned with the threat of communism, Maisie sees the growing threat of the early Nazi organizations.
Well Maisie, we could have really used you as a nonfictional character in the real world.
at Friday, May 04, 2012