umm…apparently nora roberts has an alter-ego that no one cared to tell me about.

Whoa, I am WAY behind.  The In Death series by J.D. Robb is actually Nora Roberts???!  Who would have thought? Some of what I’ve read by Roberts has had an air of suspense, but it’s mostly full of love and fluff, and when in the mood, I crave that stuff. Come to find out the futuristic Celebrity in Death novel and the 33 previous installments of the series are all her. Nora Roberts, your Kick Ass Book Reviews street credibility has gone up about eleven notches. You’re welcome.


I have read the In Death series sporadically, which works for me. But if you are just hearing about it, I would start with book one and continue on through. I mean, why not have a 34-book series to read? Especially when it’s a good one. And what else are you going to do this summer? 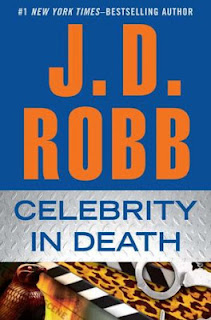 Celebrity in Death is quieter than previous novels, chilling really, in a good way. Set in New York City year 2060, Lieutenant Eve Dallas continues to be the star, and all of the favorites from previous books in the series are there as well. The Icove Agenda was Nadine Furst's book that sky rocketed to the bestseller list, Eve had lived it, and now she is standing on the set watching an actress play out the lines she, herself spoke when finding young Dr. Icove dead in his home office. In celebration of the upcoming film the main cast and crew, along with Eve, Roarke, Peabody, McNabb and the Mira’s are enjoying a nice dinner party when actress K.T. Harris is found dead in the rooftop pool where the party is being held. There are a ton of suspects, and Eve is already on the case. Well, Nadine Furst’s lucky day, she’s getting a sequel dropped right into her hands.
at Tuesday, April 10, 2012