this book title speaks to me.

Love Me or Else. You may find these words threatening; I find them rather romantic, no? Oh that’s right it’s creepy when a woman gets so jealous of the woman she thinks the boy she likes has a thing for, and shoots her dead. Forgive me.


Love Me or Else: The True Story of a Devoted Pastor, a Fatal Jealousy , and the Murder than Rocked a Small Town by Colin McEvoy and Lynn Olanoff, is a mouthful of a title, and this is a mouthful of a run on sentence, but there’s just so much juicy stuff, I’d hate to leave anything out in one breath. This is the TRUE story of Mary Jane Fonder, who became obsessed with the (supposedly) handsome pastor of her church, Gregory Shreaves, so obsessed that she committed murder. First she took the time to throw herself at him, making it super awkward THEN decided murder would be best. Her crazy ass mind convinced her crazy ass self that Pastor Shreaves was interested in a young member of the church, Rhonda Smith. When Rhonda was volunteering at the church, she was shot to death. Apparently Mary Jane left a trail of crazy behind her because it was easily discovered that she was the culprit. The story is filled with a lot of details about the trial, not much on the back story of these people, which I would have preferred, but it is still excellent. 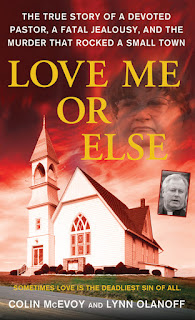