Bestselling author and former Latino gang member, Luis Rodriguez explains to us his recklessness and anger fueled by growing up in an impoverished barrio in the San Gabriel Valley of L.A. County, in his latest book, It Calls You Back. Where he grew up it was very common for Hispanic youth to get sucked into a self-perpetuating pursuit of drugs, gang life, repeated arrest, early pregnancy, blunted education, and dead-end jobs. Rodriquez's childhood was no exception. 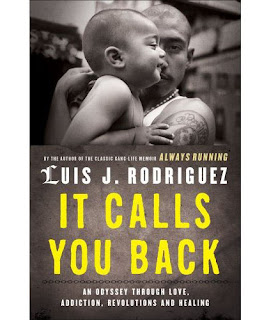 This is an open and honest autobiographical account of a survivor in a violent world that kills so many. In this sequel to his first book, Always Running, Rodriquez fights to change. He details the sense of responsibility he felt for the community that had given him a second chance to be a good citizen, his involvement with Chicano activist groups, his literary beginnings in journalism and later poetry. Rodriquez watches as his eldest son begins the journey that he himself fought so hard to escape. It is as if the shadows of drugs, violence and prison will always be upon him and his family.

Kudos to you friend, for living to tell the tale, sharing your story and for always striving to be better.
at Monday, February 20, 2012