a great tribute to our fallen stars. 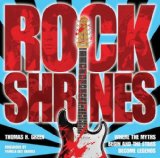 There have been numbers of musical geniuses and beloved artists who have died too young. A well-known example: The Forever 27 bunch, including Kurt Cobain, Janis Joplin, Jim Morrison and Jimmy Hendrix, all died at the age of twenty-seven. It's sad to see such talent leave this world, especially when it could have been prevented. These four icons, along with the memories of many others live on through records, CD's, music television and books like, Thomas H. Green's Rock Shrines: Where the Myths Begin and the Stars Become Legends.
In Rock Shrines, Green does not only show us the shrines of those who lived and breathed rock 'n roll. Included are a variety of genres, like John Lennon, Michael Jackson and Tupac. Each of the book's nearly two hundred individual entries is illustrated with beautiful photographs of both the stars and the shrines, along with a brief, but usually very complete composite of the artists' work and impact in both life and death. The photography is unreal and the memorabilia included is unlike anything you have ever seen before.
Yes, some of these musicians did become even more famous after death, but what a shame it must be to have missed it.

For a chance to win a copy of this book, e-mail your name, address and this book title to: jenileerose@yahoo.com 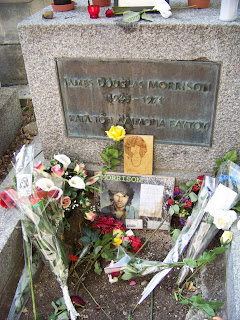 Paying my respects to Jim Morrison at the Père Lachaise Cemetery in Paris.
at Thursday, November 04, 2010